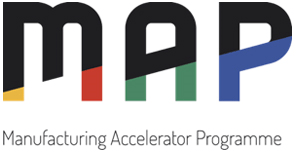 17 November 2015 – As an integral part of the Netherlands Economic Trade Mission to South Africa, the Manufacturing Accelerator Programme (MAPtm) hosted a round table at the `House of the Future’ at the Turbine Hall in Newtown. Guests included executive officers of state-owned companies, Dutch-owned companies in SA. and selected representatives of the visiting Dutch delegation. The initiative, held in conjunction with the Department of Public Enterprises (DPE) and the Department of Trade and Industry (DTI), encouraged delegates to discuss their challenges and wishlists for potential cooperation and assistance from the Dutch government, and from each other in terms of stimulating both economies.

The `Supplier Development Opportunities for Dutch Companies in South Africa’ round table discussion was arranged by the Industrialisation Supplier Development Association (ISDA) and MAPtm in collaboration with the Royal Embassy of the Kingdom of the Netherlands and SANEC as part of the 5-day `House of the Future’ event and the official visit of the Dutch Prime Minister, Mr. Mark Rutte.

Bringing together stakeholders from South Africa and the Netherlands, the round table discussion provided a platform to discuss new trade opportunities and possibilities for collaboration. Ideas were shared about how MAPtm can help state-owned companies and other stakeholders improve their supplier-base and competitiveness in terms of cost, quality and on-time delivery. Information was also shared with regard to the projected SOC spend for the next ten years and how suppliers should go about becoming registered vendors, which was well received.

Ian Huntly, one of the founding members of the MAPtm initiative, said this is the largest trade mission to sub-Saharan Africa in Dutch history and bodes well for local enterprise in South Africa. Taking place from 15 – 18 November the visit will be led by Mark Rutte, Prime Minister of the Netherlands, joined by Minister of Economic Affairs and Agriculture, Martijn Van Dam and representatives of over 75 companies. Four of the leading economic sectors on which the Dutch economic partnership is focused will be represented namely agri-food and horticulture, water, transport and logistics, as well as life sciences and health.

Prime Minister Rutte confirmed the longstanding relationship between South Africa and the Netherlands is a strong one, encompassing politics, business and culture. In the recent past, the Netherlands was a partner for South Africa in their quest for equality. He said they had now transformed the relationship into a fully-fledged economic partnership that benefits both countries. He confirmed he and his delegation were looking forward to continuing the close cooperation in the future on many topics of mutual interest, including science and technology, migration and trade and investment.

South Africa is the Netherlands’ most important market in sub-Saharan Africa. They are South Africa’s eighth-biggest trading partner, a major foreign investor, and the second-biggest market for the country’s agricultural exports. More than 350 Dutch businesses, both multinationals and small and medium sized enterprises, operate in the South African market. Together they generate more than 100,000 jobs for the South African economy.

Huntly confirmed that Dutch businesses are seeking long-term partnerships. “They have tremendous innovative capacity and want to work together with South African businesses to boost productivity and create jobs. This trade mission is an excellent opportunity to assist Dutch companies in doing business in and with South Africa and bring our countries even closer together as business partners,” said Huntly.

The Manufacturing Accelerator Programme (MAPtm) is a worldwide initiative developed in order to release the potential of the manufacturing industry. MAPtm is a programme for manufacturing companies which consists of an integrated set of services and tools. With MAPTM enrolment, companies have a focus on what they can do to grow and increase their global competitiveness. It supports continuous and on-going improvements in the control of business and profitability.

The purpose of the Memorandum of Agreement between ISDA and MAPtm and between Transnet and MAPtm is to work towards the common objective of promoting and developing companies to act as industrial suppliers to State Owned Companies (SOCs) in South Africa. While MAPtm’s role will be to develop opportunities by raising funding where needed, mentoring and training, implementing smart IT solutions, and developing new educational material in conjunction with business schools, the ISDA in its turn will continue to support the implementation of localisation, transformation and industrialisation programmes within the supplier communities of SOCs and other strategic industry sectors to ensure the sustainability and long-term growth of their supplier bases. Transnet is keen to develop and transform their suppliers both directly and through their OEMs to become a globally competitive rolling stock industry in line with the National Development Plan, and will facilitate all parties developing the OEMs compliance to their commitments to local content obligations. Transnet is partnering with ISDA and Mtm to implement the MAPtm Programme to its first 5 suppliers before rolling out into subsequent implementations with more suppliers.

Mr. Thabiso Taaka, Chairman of the Industrialisation Supplier Development Association (ISDA) added, “MAPtm has signed agreements with the ISDA and Transnet to develop suppliers to become internationally competitive and sustainable manufacturing businesses that will go a long way to aid the revival and transformation of the manufacturing sector in South Africa, and we are pleased to have selected MAPtm for this critical part of the evolution of our country’s democracy. The Dutch have played an important role in the country’s transition, and remain one of our key allies.”

Established in 2013 by Rifle-Shot Performance Holdings and Isah International B.V. from the Netherlands, MAPTM aims to capture world class practices and technologies to enable the regeneration of the South African manufacturing sector and, by addressing elements such as cost, quality, on-time delivery, to elevate SA’s manufacturers to equal world class in a unique and highly transformative engagement. MAPtm South Africa has become part of the world-wide MAPtm programme which combines best practices, knowledge and experiences from all over the world, including the US and Canada.

Operating as part of the Department of Public Enterprises, the ISDA seeks to support the implementation of localisation, transformation and industrialisation programmes within the supplier communities of SOC’s by building a technologically dynamic, export orientated, globally competitive and transformed national manufacturing industry. Thabiso Taaka, chairperson of the ISDA says, “It is imperative that State Owned Companies are in fact honouring designated industries and their obligation to spend their supplier development funds on local manufacturers. Local manufacturers must be listed as preferred suppliers.”